One of the things that my friends had been telling me is that I need to try out Friday brunch in Dubai. At first, I thought this sounded pretty good; I love eating so why not go eat some food somewhere. What I didn’t know at first was that brunch is nothing like the brunch back home – it’s not the meal you have late in the morning because you woke up late / forgot to have breakfast and think it’s too early for lunch. It’s even better, it’s an all you can eat and drink buffet which lasts 3-4 hours! Generally there are 3 ranges for brunch; the first is alcohol free and is the cheapest option, second is has the house drinks and the top tier has champagne and is also the most expensive. 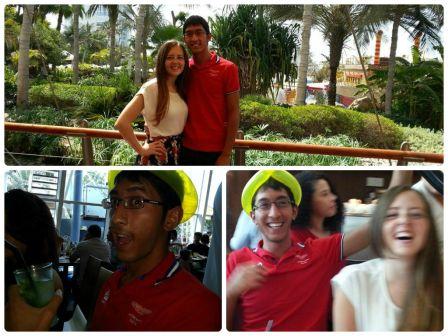 So many places do brunch in Dubai, which gives a lot of options of where to go to and of differing price ranges. We decided on going to a place called Lattitude, which is one of the restaurants in the Jumeirah Beach Hotel, a 5 star hotel near to the Burj al Arab building. This was one of the slightly more pricey ones at 440 dirhams (just over £70 each), however this also included the house drinks (unlimited beer, wine and cocktails!). Luckily we also had some vouchers from The Entertainer, which is a book of vouchers that give you discount on loads of things like fast food, dinner, shopping and hotel stays which made it a lot cheaper. 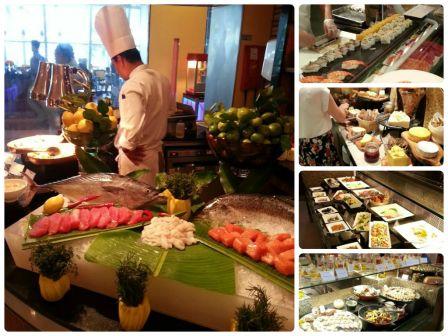 On arrival we all received a glass of champagne and were then taken to our table. We then had free reign to visit the rooms of food and eat as we please! There were 3 conjoined rooms, and they had pretty much everything you could think of with cuisine of all the major types of food that people seem to be eating nowadays e.g. various cheese selections, Italian, Indian, Chinese, American and Japanese. They even had a roast dinner section for the Brits complete with Yorkshire puddings (the Yorkshires were a bit disappointing, a bit cakey, Aunt Bessie wouldn’t be impressed). As you can imagine, we all ate and drank a lot, and are all looking forward to our next brunch wherever that may be! 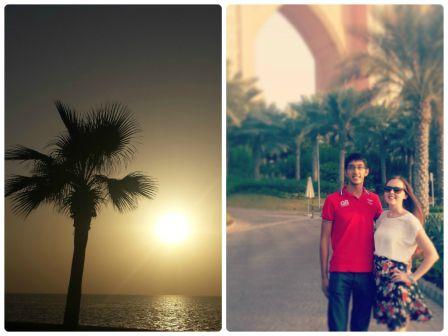 P.S. after brunch we went to ATlantis on the Palm for a few hours of dancing and we were danced out before 10pm #hardcore!