During our visit to Abu Dhabi we decided to take a visit to Ferrari World which is the world’s largest indoor theme park. I’d first heard of it when the Formula 1 Abu Dhabi Grand Prix started a few years ago, and it was built around the same time. I have been a big fan of the F1 side of Ferrari since the Schumacher days, so really wanted to go. Ferrari World has an iconic red roof with a huge Ferrari symbol on there. From where we came in on the ground though by taxi, you don’t get such a great view of this and I think you would need an aerial shot to be able to get a full view of how cool the roof looks.

I didn’t actually know too much about what was inside except for what was most likely going to be a huge advert for Ferrari. Tracey had mentioned that this was home to the world’s fastest roller coaster, so this then definitely made me want to go even more! I read a few reviews on tripadvisor and was a bit worried as there are a lot of bad reviews from people saying the queue times are awful and that staff are not very helpful. We were visiting during Eid, so we figured as it was holiday period it would also be really busy. However, I fully expect to have to queue at a theme park to get on rides, so wasn’t too fussed about this aspect.

When we got there, there actually wasn’t a big queue. It took us around 5-10 minutes at the ticket office to get our tickets, which were 250 dirhams each (just over £40). This seemed a bit pricey although it is similar to UK prices for Thorpe Park and Alton Towers (but when I’ve been there I’ve only ever gone with half price vouchers!). As we walked through the entrance, there were various F1 and road cars dotted around and this would also be a common theme around the whole park. The inside was air conditioned and there was a lot of empty and open space; a lot of features are still under construction.

We headed straight to the Formula Rossa roller coaster, the fastest in the world as we thought the queue would be really long. It turns out that we only waited for around 15 minutes here until we got on the ride. The roller coaster is shaped like an extended Ferrari F1 car, and is therefore obviously red in colour. There is a cushion which comes across your legs and you get seatbelted in. Everyone is also given a pair of goggles to wear, and after this you are ready to go! When you set off, you go slowly to the “start line” where you are held for a few seconds. While waiting, they start playing the part that everyone knows of “The Chain” by Fleetwood Mac (which was also the theme tune for the F1 programme a few years back). Suddenly you are fired off – if anyone has ever been on Rita at Alton Towers, or Stealth at Thorpe park, then it is a similar feeling to this but much faster! It goes from 0-240km/h in just under 5 seconds. Your cheeks start flailing in the wind and you can’t really breathe at first. After the initial set off, you go up and down a big dip then fired around various turns for around a minute until the ending. As it was hot outside, we were also travelling through hot air, so when it finished, it is very hot. 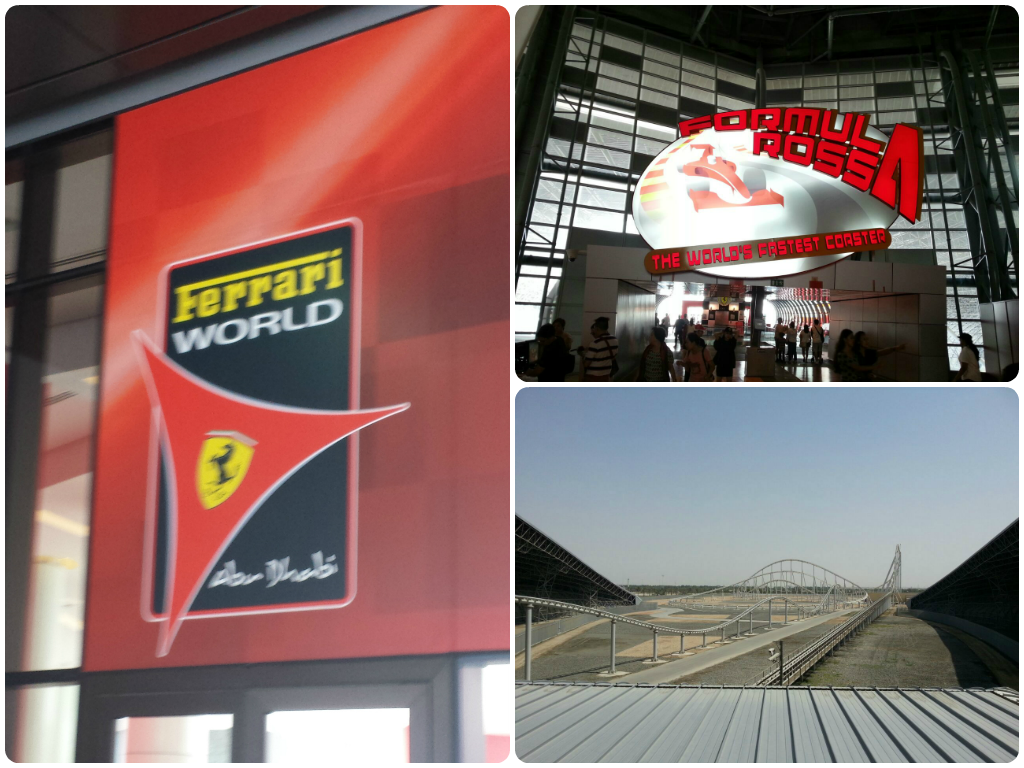 Unfortunately, the Formula Rossa was the only highlight of a pretty disappointing trip to Ferrari World. After we had been on this, we looked around the rest of the theme park, which has a lot of open space with not  a lot in it. There are some ghost train style rides, one with a very brief history to the Ferrari company and another for how a Ferrari is made. The rest is a bit gimicky, with a few Ferrari cars dotted around random places, some recreations of some features from a Formula 1 race, including a pit wall with out of date names on there (eg Rob Smedley) and also a pit lane garage.

The whole trip we were there less than 4 hours. At the end, we went to see a show called “Red” which was like a mini Cirque du Soleil, but much less impressive. Some of it was actually very good, but maybe only 2-3 minutes worth in a 25 minute or so show. However, as we only went because we thought we should make a bit more use of the money we spent getting in, we half just wanted to leave anyway. Needless to say, we will not be going back to Ferrari World ever again! We have plans to see the Abu Dhabi Grand Prix next year, which is nearby, but we’ll be avoiding this place.