A few weeks ago we went out one evening for dinner and some drinks, and during the course of the evening, one of our friends suggested that we went jet skiing the next day. I was pretty excited as soon as I heard the words jet skiing; ever since I had first come over to Dubai in March I had been making a sort of Dubai bucket list with one of my friends with all the things we would like to do in Dubai and jet skiing was high on the list!

We arranged a time and our friend picked up us all up; there were 5 of us in total. I wasn’t really sure where we were going exactly but it turns out we were heading to a lake in Al Mamzar, which is towards the airport side of Dubai. When we got there we had to give our ID’s and phone numbers in case we caused any damages to the jet skis. Before we headed out, the staff took pictures of all the jet skis, which took around 10 minutes. In this time I nearly melted. It was over 40 degrees and I was sat on a red hot seat in the sun, raring to go. 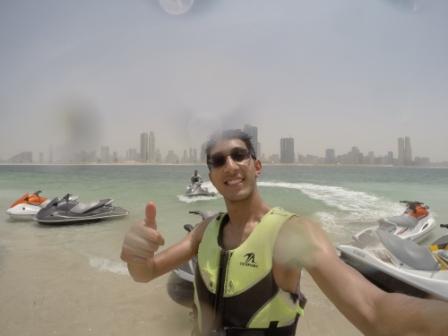 Soon enough, we were all ready and our jet skis were pushed out from the shore into slightly deeper water. It was very easy to start the engine, even for a newbie like me; all I had to do was press one button! Putting the power down was also very simple as you pull a lever similar to a bicycle brake and let go of it to stop. I set off slowly as I got used to the steering, but soon enough I was at full throttle. This is also the first time I’ve really felt a breeze in the summer of Dubai. Once we got going, I had soon forgotten about being really uncomfortable in the heat when I was sitting there waiting. Unfortunately, my speedometer was broken so I couldn’t see myself what speed I was going, but the others managed to get up to 61km/h, so I would imagine it would be around there somewhere.

The lake was surrounded by high rise buildings on one side, and on the other there were some palm trees, as well as all the other jet ski vendors. The lake also opened out into the sea, which was pretty amazing to see as the water opened up and all you can see for miles is the ocean. The sea water was more choppy than the still water of the lake making it harder to steer and you also bounced a bit more on the water. I didn’t want to venture too far out there in case I got stranded, so after seeing this I headed back to the lakes. 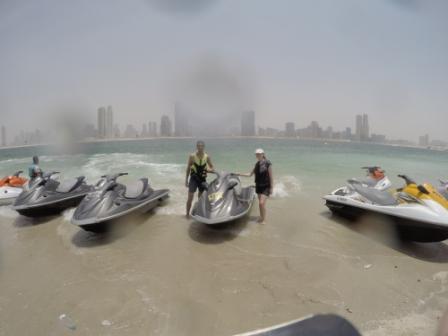 There’s not too much else to say except that we all had a lot of fun jet skiing and whizzing around the lake. Being the newbie I was a bit worried about falling in, but didn’t have any trouble. One of our friends managed to tip his jet ski over when he wasn’t moving! Thankfully it wasn’t me or Tracey. I would recommend it for anyone who wants to try it. At Al Mamzar it  was also really cheap. It was 80 dirhams (almost £15) for 30 minutes, although we got around 45 minutes on the water. Alternatively, you can go to Dubai Marina where it is 500 dirhams! This is also the first real time I have tried out our GoPro camera since we bought it. I had it attached as a headcam during jet skiing and have created my first ever video below. Hope you guys enjoy it!