Going back a few months to how we actually planned our packing for moving to Dubai; the truth is we didn’t really have a set plan! We had pretty much already decided that when we moved to Dubai, we would be in a 1 bed apartment due to cost reasons (in London we had a spare bedroom which we used more as a storeroom but also for when guests were staying). As much as it would be useful to have an extra bedroom as I’m a bit of a hoarder, it wasn’t very practical.

I had asked a few of my workmates in what they had packed when moving to Dubai. One of them pretty much brought nothing with just two suitcases and bought everything over here, while others had used shipping companies to move their belongings over. The latter option seemed a bit better for us as this would mean we could bring more things and also I wouldn’t have to buy another Xbox and Playstation! As we were living in a furnished house in London, this meant that we didn’t have any furniture to be moving overseas so this helped a great deal.

We contacted a company called Excess Baggage, which one of my workmates had used. The process was pretty simple; they have a number of different sized boxes and you order however many you think you need. They then deliver these to your house along with bubble wrap and parcel tape, you arrange a date for collection, then after you have packed them all up, they will be collected, weighed and taken to the airport. There are options to do this via cargo ship, but this can take up to two months. By going via airplane this was set to take up to 14 working days.

In terms of the actual packing and deciding what to pack, this ended up as a bit of a rushed job. We had a lot of things to sort out such as trying to find new tenants for our house in London, doing things we wanted to do before we leave and of course the wedding! By the time we got started, Tracey was leaving London to go to Northern Ireland the next day for a month before the wedding and I was leaving for Dubai at the end of the week. We both had a few things which we knew we wanted to take eg clothes, some kitchenware, sentimental items like photos and of course my games consoles as I’m a bit of a gaming geek. After this we just filled the rest of the space with anything that might have been useful so after one late night of packing, we were ready to move! Tracey left the next day and I was in for the collection of the boxes and these were sent to Dubai. 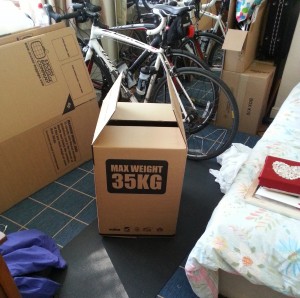 Collecting these on the other end was a bit of a hassle, involving walking around Cargo Village (an area near DXB airport where there must be hundreds of companies that help ship items abroad) in 45 degree heat then melting in a non-air-conditioned  van for 20 minutes while they found my boxes and then inspected them. However, once this was all done they delivered the boxes to our address and we safely had our belongings! All in all, the whole process took less than 2 weeks and cost around £500 for 4 large 30 kg boxes and 1 acoustic guitar and this also covered insurance. I would definitely recommend using a similar company for anyone moving abroad as it was a simple process. The staff were also quite helpful whenever I had to call them to ask them anything about delivery timings and costs for moving to Dubai.