When visiting new places, I feel it’s always good to be prepared to have an idea of what things may be like. Often when going on holiday or travelling, you’ll be visiting new places and areas that you haven’t seen before so sometimes the differences from your own home can be a bit of  shock! We’ve put together some helpful hints for the Philippines which we hope you find useful.

The currency of the Philippines is the Philippine Peso (PHP). At the time of our visit, the conversion rate meant that for £1, we received 70PHP. Overall, and especially if you are travelling from Europe and the Americas, you will most likely find general expenses fairly low. Food is pretty cheap, with a decent sized meal out costing anywhere from £3-£15 depending on what you are eating. A beer from the supermarket is just 350PHP. From a restaurant or bar, these will be around 600-700PHP, or £1. Much cheaper than the £6 beers we pay for in Dubai!

Hotels are also quite inexpensive. In Manila, we paid £100 a night to stay at the Aruga by Rockwell Serviced Apartments, but this was more on the higher end, as we wanted to finish the holiday with a nice, relaxing night! When we were looking, there were plenty of other hotels from anywhere between £25-70 a night for 2 people. We were able to pay for this without any issues with credit card, and everywhere we stayed, we were able to pay by credit card also, which was quite handy. 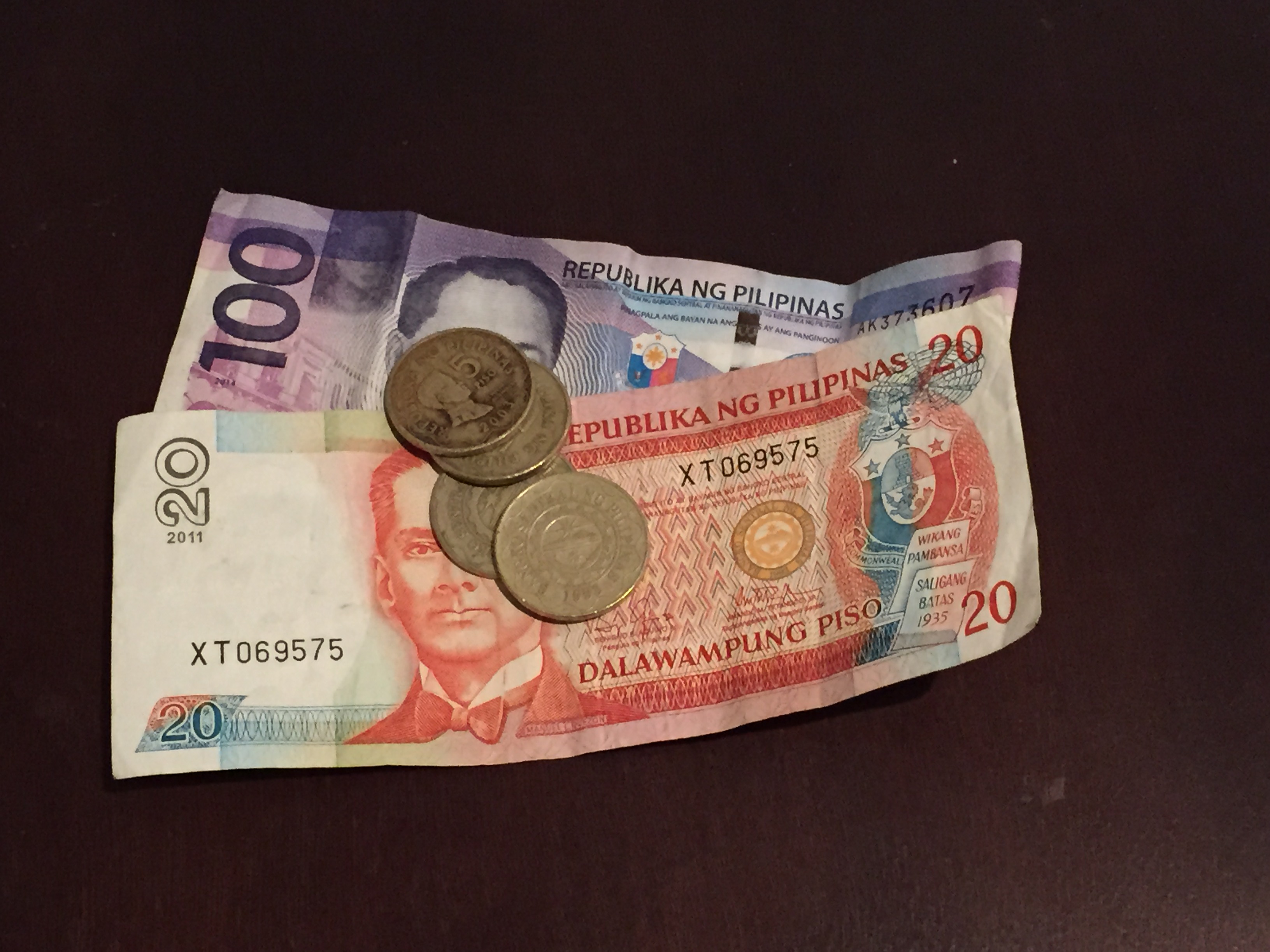 When entering the Philippines, each person is only allowed to bring in a maximum of 10,000PHP each in local currency. In English terms this is around £140-£150. The best thing to do would be to exchange some Pesos before you go so that you have some on the other end in case of emergency, then exchange the rest when you get there as you’ll likely get a better rate than your home country. Note that there are a lot of money exchangers in the Philippines, however most only accept major currencies such as the English Pound, Euro, or USD. We thought we would be able to change UAE Dirhams, as there a lot of Filipinos in the UAE. However, nowhere would actually exchange the currency, so we had to draw money out of the bank machines. When using a bank machine, make sure you use one from the bank, as apparently there a lot of fake machines which will steal your details. Also, if someone offers to exchange your money on the street at a good rate, do not accept as you will most likely get robbed. I’d advise to always carry small notes if possible. Most places won’t have change for 500 or 1000 PHP.

When leaving the Philippines, you need to pay a fee. I believe this was 550PHP each when we left, so ensure you keep a bit aside to be able to leave!

When leaving the airport in Manila it can be confusing to know which taxi to get. The “official” airport taxi is the yellow one. On leaving the airport there’s usually a big queue for these taxis, which you could be in for an hour or more (which we found out on our first night!). This taxi is pretty cheap and got us to our hotel which was 8km away for 300PHP.

There’s also a white prepaid taxi which is more expensive. However there’s always one free, so if you don’t want to wait then you can get one of these and these are safe also. Sometimes there are people offering taxi services but are not real taxis, so if someone looks a bit shady then beware because they probably are! The white taxi for the same journey was quoted to us for 1400PHP, although we didn’t actually take it. If you get one of these, you pay the amount up front and also receive a ticket which has the taxi details and the cost etc. The idea is that you hold onto this ticket should you ever need it if you encounter any problems, so never give this ticket to the driver.

Flagging down a taxi is also very straightforward. Our hotel actually did this for us when we needed one coming back to the airport but like anywhere the staff stuck their arm out and one stopped. Apparently it’s common that some taxi drivers will try not to use their meter, so make sure they always use their meter and reset it when you get in. If they do not, they’ll likely try and charge you more so the best thing to do would just be to get out and flag another one down. We had the instance of the meter being used, but it was already running when we go in the taxi so we paid the taxi driver that amount less than was shown when we got to the destination.

Living in Dubai, you can forget that pickpockets actually exist; however I had read that there are some around so always keep an eye on your belongings. Tracey works with a Filipino who said that one day he had his necklace snatched off his neck when he was waiting for a taxi! We decided to leave all of our jewellery at home just in case. I also bought a separate money holder which I could clip onto my belt so that it was secure, and kept money in 2 separate places just in case. I had also heard of some stories of people putting their bags in a taxi and the taxi driving off before they could get inside. When we were putting our bags inside the taxi we would leave a door open so they wouldn’t drive off before we got in, same with when we were taking our bags out.

Tipping in the Philippines

Staff wages in the Philippines can be extremely low. It’s common to tip taxi drivers, waiters, hotel staff, porters etc if you feel they have given you a good service. We were speaking to a taxi driver who was telling us he earns around 15000PHP a month (around £230). Taxi drivers need to earn 1500PHP a day, then they are able to keep the money that is earned on top of that. Before leaving, I knew that it was nice to leave a tip but wasn’t actually sure how much. For taxi drivers, I had given tips of 100PHP, and for our tour staff had given 100-200PHP, depending on how we felt the tours went. We befriended a couple, one of whom was from the Philippines and I was asking him about tipping. It turns out that apparently I was being quite generous, as often people may tip anywhere between 10-50PHP and sometimes not at all. However, I was happy to continue as I was as it’s just a couple of pounds to me but means a lot more to these guys who work extremely hard for a living.

Flight delays are common in the Philippines. Pretty much everyone we had spoken to in Palawan had experienced some sort of flight delay and both of our internal flights were delayed as well. The queues in the airports also move extremely slowly, so make sure you arrive early and also don’t plan anything too close to a flight time in case you are delayed.

How many really great Filipino restaurants have you been to? One? Two? None? During the course of our stay, we didn’t find any spectacular places to eat. It seems that in a lot of places, the focus is on volume rather than quality of food. That’s not to say the food was bad though, as it wasn’t at all. It seems that all of the tours had the same food options, which tended to consist of buffet style meals with rice, various meats, seafood and vegetables as the options. In particular, the food on Tour A and C at El Nido was much better than the other tours. One night we ate at a local restaurant and tried Chicken Adobo, which is a local dish and also some crocodile! Other than that though there weren’t any truly memorable meals.

One local delicacy which I was looking forward to trying is Balut. I wasn’t aware of this before I went, but Tracey was telling me about it, although she wouldn’t try it herself! Balut is basically a duck embryo which hasn’t hatched, and can be anywhere between 2-3 weeks old and is boiled in the shell. We bought ours in El Nido from a kid selling these in a tub for 20PHP. Apparently it’s quite common for children to be selling things in the evening after school as they try to make more money for their families. Luckily, one of our new friends from Tour A that we met was from the Philippines, and he showed me how best to eat it. Firstly you crack open the top of the egg, and drink the juices. Secondly, you peel off the remainder of the shell, add some salt and some vinegar, then just eat it all. It’s not a pretty looking dish as you can see a duck and its beak and all, but actually it tasted quite good. I had a couple of these while I was there; the first time it was softer, and the boy said it was 14 days old. The second time, it was much harder and was supposedly around 21-22 days old. If you’re feeling adventurous I’d recommend trying it, however it doesn’t look pretty so avoid it if your stomach turns easily!

If, like us, you are planning on going on some tours, its always handy to know about where to book. We booked everything we did beforehand from www.gopalawan.travel and didn’t have any issues. We paid for everything before we left, and took our receipts with us. Drivers would come to the hotels we were staying at in the mornings to pick us up on time and everything goes from there. It turns out that you can book everything while you’re in the Philippines, with many hotels even having an option to book from there so there shouldn’t be any issues. It cost a couple hundred extra PHP to book online before we left, but it meant we didn’t need to worry about anything while we were there. When you get there, remember to haggle as you’ll likely be able to get a few hundred PHP off the tour.

I know it’s been a long post, but hopefully after reading this you’ll be a bit more prepared for the Philippines with our helpful hints! The main thing is have fun and stay safe! If there’s anything I might have missed and you’re curious about, let me know in the comments!